Flexibility: You can choose Premium safaris in Parks other then Normal safaris. Number of days & safaris can be modified as per your interest.
Availability: From October to June every year.
Recommendations: Plan early save a lot. 04 months advance planning recommended.

Arrive at IGI Intl airport meet by our representative. Transfer to hotel. Overnight at the hotel.

Delhi- the commercial hub has many tourist attractions to offer. Old Delhi takes you through the narrow streets that are a fascination and the crowd is huge. Old Delhi has a lot of historical monuments to visit like the Red fort, Jama Masjid. Further on is the Qutub Minar. Visit vibrant shopping complex of Connaught Place, Delhi Haat for handicraft goods and delicious food bonanza or just drop in at Jan path- for buying a variety of cheap and best items. If you are looking for spiritual peace, visit Lotus temple, which is also famous for its marvelous architecture and heavenly beauty. Take a stroll at Rajpath. Or pay a visit to India Gate and Rashtrapati Bhawan for viewing monuments made during British era.

At Delhi we indulge in all day tour of the entire city and the places of interest both in Old & New Delhi. Overnight in hotel.

After breakfast we drive to jaipur. It is the capital of Rajasthan and also known as pink city.The most important tourist attraction is the Amber fort and a ride to the fort in the afternoon after reaching Jaipur on an elephant back is what the guests look forward to.

The Kachchawahas ruled from Amber, 11 km from Jaipur, for seven centuries. With a history so old, it is not unexpected that there is a lot of the past that can be traced in its archeological history. While many of the early structures have either disappeared or ruined, those dating from the16th century on are in a remarkable state of preservation. Amber as it exists now is the handiwork of three of the kingdom’s rulers that include Man Singh, and Jai Singh I and II. Approached from a steep ramp, visitors ride up on elephant back, entering through the grand Singh Pol gateway and continuing to Jaleb Chowk, the courtyard where they disembark from the pachyderm. From here, they are faced with two flights of steps, one leading to Shila Mata complex with its enshrined image of the goddess, and the other to the main palace complex.

Morning the places that are left out in the city tour of Jaipur are visited before leaving for an afternoon drive to Ranthambore Tiger Reserve. Overnight at the hotel.

Ranthambore national park’s abandoned fortress, lakes and above all its `friendly’ tigers have made it one of the most filmed wildlife reserves in the world. Ranthambore was declared a wildlife sanctuary in 1955 and became part of Project Tiger in 1973.

Ranthambore National park is famous for its tigers and is one of the best places in the country to see these majestic predators in the wild. The tigers can be easily spotted even during the day. A good time to visit between November and May when the nature of the dry deciduous forests makes sightings common. The Park, which covers an area of nearly 1300 sq. km. and is set between the Aravali and Vindhya ranges. Its deciduous forests were once a part of the magnificent jungles of Central India.

Overnight in the hotel.

Morning & Evening drives in the park or Premium safaris full day or half day.

From Ranthambore we move towards the Paradise of the most beautiful birds that is Bharatpur. This bird sanctuary is only 29 sq Kms. These splendid bird-lands have now been converted into a remarkable, if small, national park. Evening visit to the bird sanctuary by cycle rickshaw.Overnight stay at the hotel in Bharatpur.

If you really love birds then you can take one more safaris to th birds paradise. One may not want to leave this paradise but nothing to get disappointed about. We move towards the land of the Taj. Enroute we also visit the Fatehpur Sikri.

Badal Singh established the city of Taj in 1475. Agra finds mention in the Mahabharata as Agraban. This city in those days was considered to be the sister city of Mathura which was more prominent than Agraban. Agra came into its own when the Lodhi Kings chose this place beside the Yamuna to be their capital city. Sikander Lodhi made Agra his capital but Babur defeated the Lodhis to capture not only Agra but also laid the foundation of the Mughal Empire. Overnight at the hotel.

Set amidst the Vindhyan ranges and the eastern flank of Satpura hill range Bandhavgarh National Park is one of the best places to see and enjoy wildlife in India. The Reserve is named after the highest hill Bandhavgarh (807 m.) in the center of the Reserve. A chain of smaller hills, 32 in all, surrounds this hill, forming a number of valleys and spurs in between. This park was the former hunting preserve of the Maharaja of Rewa and at present is a famous natural hub for White Tigers. White Tigers, now a major attraction around the world’s zoos, were first discovered in Rewa, not far from here. The terrain is broken, with rocky hill ranges, running roughly east west, interspersed with grassy swamps and forested valleys. The rivers Johilla and Son flowing on the eastern side, the river Umrar passing through the western fringes and the Bandhavgarh hill, visible from as far as 30 km., are some of the landmarks of the Reserve.

Much of the park is covered in Sal forest, replaced by mixed forests in the higher elevations of the hills. There are extensive strands of bamboo, which flowered in 1984-85, and grasslands. Generally the forests have less undergrowth here, thus offering better sightings of wildlife, notably mammals, including the daylight sightings of Tigers in the grassy ‘maidans’. More than 60 Tigers are estimated for the park.

As we move towards the end of our tour, our esteemed guests are taken to Kanha national park, another hub for the most sought after Tigers.

Kanha is considered to be the Kipling country and the nearby forests were the setting for the "Jungle Book" by Rudyard Kipling. It’s an outstanding national park of Central India, noted for its last remaining population of the hard-ground race of the Swamp Deer. Spotting wild animals is always a matter of luck, but Kanha National Park is so rich in wildlife that the odds are tilted in your favor. There are a healthy numbers of the Tiger found over here, which may be seen during the day, and is one of the best places left to see them. There are herds of spotted deer to be seen. With a little luck, you could also spot the timorous barking deer. There is also a very strong possibility that you will see the rare hard-ground Barasingha, the Swamp Deer. Once there were only 66 of these in Kanha National Park, but careful conservation and management raised their population to over 400. It was in Kanha National Park that the eminent zoologist George Schaller studied the relation-ship between predators and its prey and came out with the book 'Deer and The Tiger'.

On reaching the Kanha national park the guests are checked into the resort and the plan for the evening Jeep safari at the Kanha Tiger Reserve is made.

This is the last day at the park as our tour comes to an end. There is morning Jeep Safaris conducted in the park. Later in the afternoon the guests drive to Jabalpur to take a train to Delhi. Take overnight train to Delhi.

Arrive Delhi in the morning. Later transfer to Intl airport to fly back home. 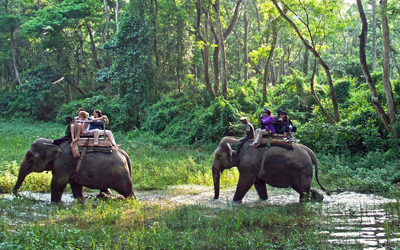 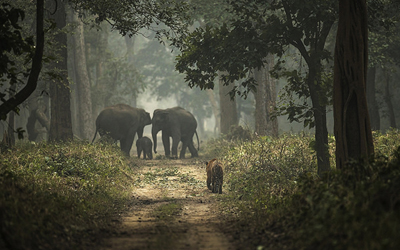 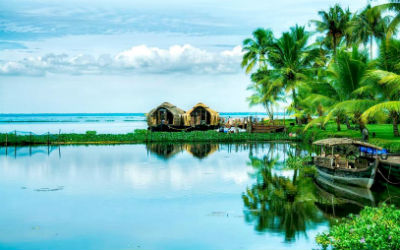